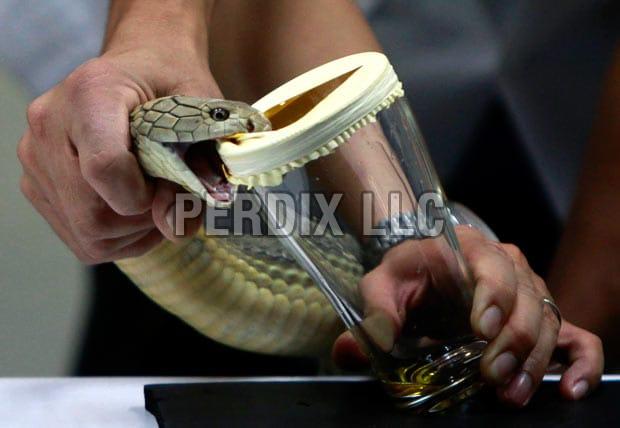 What is Venom Good For? Snake Venom Extract to Fight Stroke? An Experimental Drug Derived from the Venom of the Feared Malayan Pit Viper Shows Promise for the Treatment of Stroke, An Analysis of Six Studies Involving Over 4,000 Stroke Victims Suggests. the Drug, Known as Viprinex, May Double the Time Window During Which Victims Can Be Treated Following the Onset of Symptoms, Researchers Say. the Drug, also Known By the Generic Name Ancrod, is Designed to Help People Who Suffer An Acute Ischemic Stroke, the Most Common Type. It Occurs When Blood Flow to An Area of the Brain is Compromised By a Blood Clot. this Leads to the Death of Brain Cells and Brain Damage. Currently, the Clot-buster T-pa Can Be Used for Ischemic Stroke, But Time is of the Essence: It Has to Be Administered in the First Three Hours After Symptoms Strike. Research Suggests Viprinex Can Be Given Up to Six Hours Out, Says Study Head Bart M. Demaerschalk, M.d., An Assistant Professor of Neurology At the Mayo Clinic in Scottsdale, Ariz. By Expanding the Window Beyond Three Hours and Up to Six Hours, Viprinex Would Hopefully Expand the Number of People that Can Be Treated for Acute Ischemic Stroke,Says American Stroke Association Spokesman Ralph Sacco, M.d. Sacco, Director of the Stroke Service At Columbia-presbyterian Medical Center in New York, Was Not Involved with the Research, Presented Here At the American Stroke Associations International Stroke Conference 2007. Venom Milked from Vipers On Snake Farm Viprinex Packs a Triple Punch Against Stroke, Preventing New Clots from Forming, Breaking Down Existing Clots, and Thinning Out the Blood, Thereby Improving Blood Flow to the Brain.